It was a busy month for Young Athens Professionals. We planned and executed one of the largest YAP Happy Hours ever and also put together and hosted a massive after party for Ohio Alum & Imgur Founder Alan Schaaf as well as Reddit Co-Founder Alexis Ohanian.

Happy Hour was a fun time, even in the cozy space of Sol. It may be a small restaurant, but it’s got a huge personality. If you missed Happy Hour, we encourage you to visit Sol on your own and try their amazing Mahi dip, delicious salsas and wide variety of rums. They do have a full bar as well – Try it all!

“Sol’s menu features foods that until now, I could only get while visiting the Lower Florida Keys. I’m so glad to have this food right here in Athens!” ~YAP Coordinator Tiffany

Next month’s Happy Hour will be one to remember, no question about it. We’ll be heading up to the Ridges to take in the wonderful sights found at the Kennedy Museum of Art. 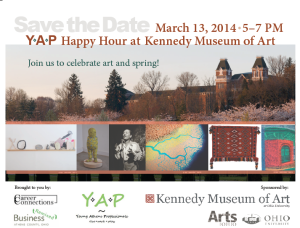 Thanks to YAP member Petra Kralikova, Curator of the museum, we will have Happy Hour in the museum. Snacks and an open bar will be provided.

“Go Forth and Suck, Bobcats!”

Turns out that Alexis Ohanian, co-founder of Reddit, is one of the nicest guys you could meet. He arrived at our YAP After Party about an hour after his speaking engagement through the Ohio University Center for Entrepreneurship Guest Lecture Series and stayed until well after 1am speaking with fans, future entrepreneurs and area professionals.

1. Diner food can help form epiphanies. (We hope this will remind you that Union Street Diner, Court Street Diner and Columbus Road Diner are all great options for amassing brain power with tasty food!)

2. You have to try, even if you fail. Fail a bunch of times… It’s totally okay!

3. Every “first attempt” at a project is janky. (Below is an example from the Wayback Machine… WordPress 10 years ago)

The moral of the story was this… Use it as a metaphor if you will:

If waffles mean more to you than the LSAT, you shouldn’t be a lawyer.

After bringing these meaningful, yet simple, ideas to light, Alexis brought Ohio alum Alan Schaaf to the stage for a discussion about creating. Alan created the first “janky” version of Imgur, the largest and fastest-growing image hosting site on the web, in his dorm room in 2009. He then continued developing the site at the Ohio University Innovation Center.

Alan noted that one of the most important factors in success of a startup (of any kind) is being able to Google things effectively. If you’re puzzling over this, think of your friends who wrote something on Facebook today like “What’s the temperature?” or “Which bank is closest to Columbia Street?” 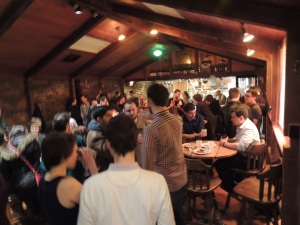 Once the event concluded, Alexis spent some time signing copies of his book, and then he and Alan joined us at Jackie O’s for snacks, drinks and camaraderie. A great time was had by all, the food was phenomenal (did you taste that artichoke dip??) and things were really jumping for a Monday night.

We sincerely appreciated the opportunity to put this event together, and hope that in the future we’ll have the chance to bring Young Athens Professionals and various special events together to continue promoting our group in the community.